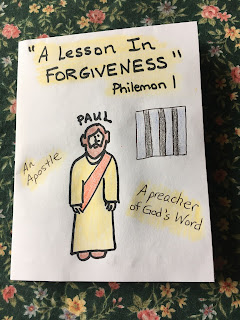 BOOK TO REMEMBER:  1 Thessalonians.  Write "1 Thessalonians" on small pieces of paper and hand out to the students at the end of Bible class, so they words may be taken home, memorized, and recited at the next Bible class. By memorizing the books of the Bible, the children will be able to find any book of the Bible without dependence on lists, bookmarks, or parents.

PRAYER:  May we always be happy for those who have heard the Word of God, studied the scriptures, and obeyed the Gospel of Christ like Onesimus and Philemon.
SPECIAL SONG:  Be patient And Kind (see April 2014 - Songs We Sing in Bible Class #1 on this blog.  If you click on the orange icon by the song, you will hear the tune.)
VISUAL AID:  Draw three men on a white board or a chalk board (if desired, simply use triangles and circles for an easy drawing).  Write the names of Paul, Philemon, and Onesimus above each of their heads.  Refer to the board as you teach the lesson.  Make it simple and easy.  At the end of the lesson, write the words "love," "gentleness," and "forgiveness" around the men on the board.